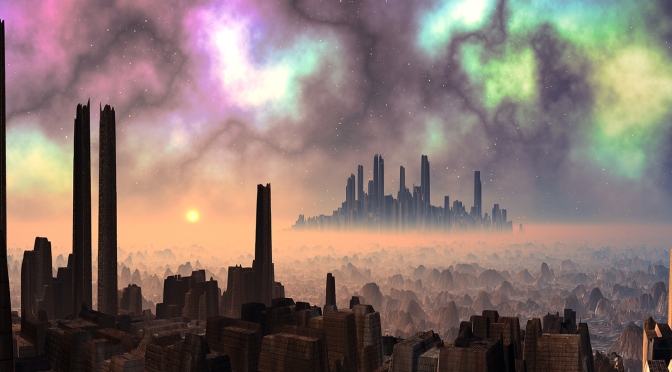 Outside, thumping relentlessly on my windowpane, the ruptured Chiba sky pours its thick, sticky summer rain. I take a long drag on a knock-off Marlboro, synth-tobacco clinging to my throat with a taste like ozone.

The sky is a cold slab of television-grey, lit by the humming neon of the Shinjuku district as it slices through the smog from over a mile away. Sixty-five stories up and I can feel it – the Biz – far below on the streets, in the alleyways. The eternal hustle; a grey lawless economy, both sustained and frowned upon by the Zaibatsus who feed off its live-or-die vitality. In the bustle, amongst these thousands of hustlers, pimps, dealers, fixers, runners and marks, a hired door punk like me can feel God-damn alone. I need to get out, just for a few hours.

A few key punches on my Mac-Deck later and I’m jacked in. Virtual info floods through me like I’ve stepped into a neon waterfall. It’s fresh, clean; the virtual world has no grime or dust. Just perfect lines. And freedom. This is my Second Life.

I take a soar to the nearest night-island, maybe I can jack in again – if you know what I mean. A few byte-cocktails and a few laughs, and I never go home without an IM. My virtual appearance is a gruffer, beefier and more handsome version of myself. A lot more. Hell, it doesn’t even look like me, but it’s the man behind the Av that the chicks want to meet.

I arrive to find the place swamped with avatars. Great. Yet another corporate psuedo-political movement, shouting and screaming at some lowly In-World Corp. Damn, I hate the two-bit politics of this place. Rich kids and Corp Suits all with the money to run or ruin this metaverse. I don’t even have the L$s in my V-Wallet for a weapon; then I’d really join in this shit.

This isn’t how it used to be. Now I got virtual rent to pay and riots to avoid and every digital island is an advert. I haven’t got laid in months. And I’ve no friends left since Linden Labs hiked up the jack prices. Something has infected this World – the insidious crawl of marketing, for starters. And now there’s only one place in it where I still feel free…

A few jumps later and I’m landing on a promontory off the coast of the Tessier Ashpool commercial sprawl. I walk down an alley to a flight of stairs that lead to an underground cellar. I crank the door open and step inside to find a smoke-filled room with a couple of Avys hunched over virtual halo-decks. This is where I come to get away from it all, just for a few hours.

I ask the scrawny Flatline by the door for a Linden. He obliges. I light up and the smoke fills me. Virtual smokes – beautiful. I set myself down at a terminal and after a few punched keys I jack my Avatar into a world where the res is too low for advertisers to achieve meaningful content engagement.

Sure, the graphics are a little blockier, the animations a little jittery, but my Av gets a kick out of it. Hell, so do I. My twice-removed perception feels liberated, withdrawn from consequence or shame. So I stub the Linden out and pour my soul into a subset of data, to explore this world within a world, a realm as-yet untainted by its parent reality, my perception’s grandchild, my Third Life.

I wrote this piece as an idea for the Halfbakery – a repository for silly, irrelevant, unworkable or sometimes genius ideas – back in the summer of 2007, when Second Life was still a thing. It started out as just a piss-take of virtual reality worlds. I have the tendency to think meta when crafting jokes for the internet, so the idea came of a virtual reality that became so flooded with pricks that you escape to a deeper virtual reality within that one, in an almost Inception-level of depth.

I was later informed Kit-Kat had the same idea.

Silly concept really, but as I am often wont to do, I got a bit carried away; it will come as no surprise I was reading William Gibson at the time. What emerged was practically Neuromancer fan fiction. So, although the story itself is mostly scene-setting and no plot, I still enjoy the style and the cyber-noir voice of it.

It taught me a few things back then too, like the use of character-specific metaphors: “a taste like ozone”; “television-grey”; “neon waterfall”. They simultaneously add tone, character and visual colour – a triple-whammy of narrative embellishment.

Anyway, I hope you enjoyed it.

A first-time novelist's journey. Will I become a success or a cautionary tale?

Songs of Sirens and Stars